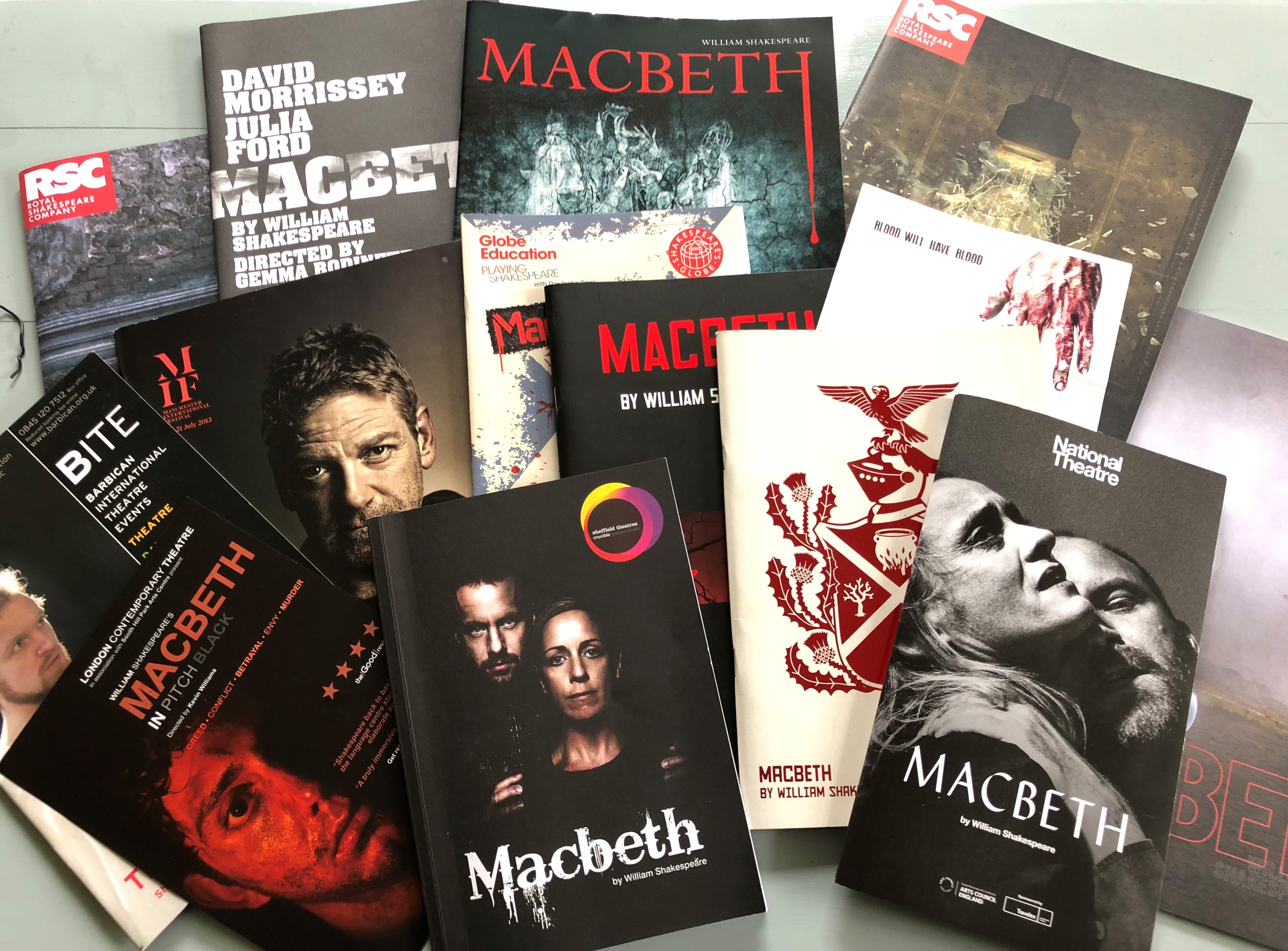 My mission: To go on 60 dates with friends & family to celebrate my 60th birthday.

I admit it. I’m passionate about William Shakespeare’s Macbeth – in fact I would go as far to say I am a complete anorak when it comes to this play. Definition: A person obsessively interested in a thing or topic that doesn’t seem to warrant such attention.

Oh, but this beautiful text does warrant such attention! And, I’m so lucky to have a friend who, like me, loves to pursue this story around the country.

It all started back in 2000 when I decided to write a Masters dissertation on ‘Convergent Media and its Impact on the Theatre’.

How, I wrote, do we interest young people in the world’s greatest story-teller when they can play videogames? The solution dawned on me one evening. Why not make a computer game out of a Shakespeare play? I chose Macbeth – its theme of ambition – something I understood. And because I was once a witch – in my school days, the distant past, when studying for English O-level.

And so, a love of the text began.

It was only natural to want to see it performed on stage. Again, and again, and again – or rather – tomorrow, and tomorrow and tomorrow. As I’ve seen over fifty versions of Macbeth on stage and screen, naturally, I had to make at least one of my 60 dates a Macbeth Production. I would invite my friend, my fellow anorak.

We decided on two new productions, the National Theatre starring Rory Kinnear in the title role and Anne-Marie Duff as his Lady but, first, a dance production from the Mark Bruce Company.

Apart from the fact the front row at the stunning Wilton Music Hall, Whitechapel, was too close to the stage and necessitated looking up for 90 minutes, this was an inventive production. The witches took me by surprise and that’s saying something after so many sightings. They danced on stage in silver feathery masks and I was just thinking ‘here we go again – sugary, almost divine, witches – where’s the evil?’ when, in an instant, the trio transformed into writhing nasty creatures. Stocking pulled over faces, clever make-up, violent sound and writhing bodies, gruesome and shocking. I was transfixed.

During the interval the woman next to me plied me with questions, she was so confused she thought Lady Macbeth was married to Duncan!

Rule 1: It’s always a good idea to gen-up on the play story before you go and doubly important if there are no words.

To the credit of the director and choreographer, I had no difficulty following the play, scene by scene. I could actually hear myself quote text during sexy duets, tormented steps and hints of Highland dance. This in turn led to some disappointments. The major soliloquies of ‘come you spirits…’, ‘Is this a dagger…’ and ‘Out damned spot…’ were all skimmed too much for my liking. This resulted in a ‘lack of journey’ of the Macbeths. The cauldron scene was cut – a shame – it could have been riveting with such talent.

But I loved the invented scenes, Lady M giving wine to Duncan’s guards, her moment in his room, the wooden hill-fort set – the use of the poles transposed into Birnam Wood – and weapons in the final battle.

This is a Macbeth that will stick in my mind when many have blurred into insignificance but if parents or teachers think it will help young people with GCSE…it’s going to disappoint.

The Mark Bruce Company Macbeth On tour until Friday 18th May 2018.

Macbeth at the National Theatre, London

Directed by Rufus Norris, the artistic director, this production has garnered scathing reviews, so I went with low expectations. In my opinion, Macbeth performs better in smaller venues where the audience almost feel part of the action, so I could understand the decision to carve up the Olivier’s stage with a huge ramp. I rather liked it. Very Norse Mythology. It reminded me of the bridge between Asgard (the world of the Aesir tribe of gods), with Midgard, the world of humanity. Asgard was where Odin lived with his son Thor and his adopted son, Loki.

Shakespeare set his Macbeth in the time period of the real King Macbeth, 11th century Scotland.  A time of great cultures, the Norse, the Celts and the Anglo-Saxons. We know Macbeth defeated the Norse in Fife when Ross tells Duncan, ‘…where the Norwegian banners flout the sky and fan our people cold. Norway himself with terrible numbers…’(1.2.49).

I liked the set even if it wasn’t exactly a ‘rainbow bridge’ – but perhaps it’s where the problems start for the performers. We should see why Macbeth wants to be king. This great warrior hero risks everything, ‘the vessel of my peace,’ (3.1.68) and his soul, ‘mine eternal jewel,’ (3.1.69) to be king of a land which looks desperately unappealing. We don’t see the change from his wooden hillfort of Inverness to the magnificent fortress of Dunsinane. We don’t see his ambition. I wondered if the set had hindered Rory Kinnear in his performance which lacked the subtleties of a great Macbeth. From the cast in general there was too much shouting for my liking.

There are a number of things I look at when judging a production.

The Witches – the supernatural in this play is crucial but so many productions fail to nail it. This was no exception. Three young women, reminiscent of African voodoo, shimmied up poles or ran around the stage like frightened mice. So irritating it took my attention away from the text. The weird sisters should be fantastical creatures, even in a modern setting, recognisable in some human understanding. They should make every young person in the audience sit forward in their seats. Of course, live theatre doesn’t have the luxury of CGI as I did in my short film Macbeth’s Disciple but the director can use sound and light. I thought it a pity he didn’t use different coloured lighting for each witch, perhaps honouring their familiar animal (Graymalkin, Paddock and Harpier).

As seems to be the norm of late, the witches’ scenes were heavily cut. I haven’t seen ‘double double, toil and trouble,’ for over two years but the NT production did manage a creepy apparitions scene. Actors moved across the stage and up the bridge with distorted bodies and sightless face masks, peering out towards the audience.

The England Scene: So often cut and yet this scene is crucial to the unfolding plot. When Malcolm runs away to England after the murder of his father, Duncan, he recognises he is no match for the other possible claimants to the throne. We know this from the way he introduces the bloody sergeant, ‘like a good and hearty soldier fought ‘gainst my captivity.’(1.2.5) He would be no match for Macbeth who ‘disdaining fortune, with his brandished steel, which smoked with bloody execution,…’ (1.2.17) unseamed the rebel Macdonald from the navel to the chin. What chance would the young Malcolm have? When we get to the England scene we should see how he’s changed from his time at the English king’s court. We should see finery, in this production Malcolm still wore combats. We should see a warrior, able to defend himself should Macduff be a terrorist, intent on harm. And we should see something of the king to come. Malcolm III reigned for 35 years with great success. He was the first king of Scotland to unite the highlands and the lowlands into a multicultural Scottish kingdom because he could speak both languages (Gaelic and a form of old English). He forged new trade links with England, Norway, Flanders and Normandy* and his children became kings of Scotland and a Queen of England. This scene should show us all this but can’t if it’s heavily cut.

(*Further reading – The Lords of Alba by Ian W. Walker)

Lady Macbeth – ‘Come you spirits’ speech. It has become something of a sport for me to watch how the actor portrays this pivotal Lady Macbeth speech. Will she walk centre stage and raise her hands in the air towards heaven as she calls on the dark spirits? Will she do some form of this? I’ve seen lying on the ground, still with raised arms, I’ve seen kneeling and I’ve seen the lines delivered while squelching in peat. And now I’ve seen in delivered in a concrete bunker. I have rarely seen anything of depth. In the ‘dagger’ scene (2.1.40) we hear Macbeth utter, ‘…I see the yet, in form as palpable as this which now I draw…’ and then he produces a dagger but when Lady Macbeth says, ‘…that my keen knife see not the wound it makes…’ (1.5.50) we don’t see a knife. How come?

I think Anne-Marie Duff is a talented actor but I was underwhelmed by her performance as Lady Macbeth. I wish I could have been a fly on the wall when Rufus Norris discussed this soliloquy with her. This scene links to her sleepwalking scene if thoroughly explored.

For any aspiring actor about to play Lady Macbeth do look at my extensive discussion on her in Lady Macbeth and the Witches.

Overall, I don’t mind Macbeth set in a modern era but I do get concerned that we fail to get to the moral message of the text because the director panders to spectacle.

As far as a date is concerned, it wouldn’t matter if I didn’t much rate the production, being able to discuss it with my friend is all that matters. Well, that and a good glass of wine after the show.**

Moral of the date: If you chose theatre for a date make sure your friend is interested in the play too. If they don’t like Shakespeare there’s no point dragging them along to one of his plays.

With many thanks to Lloyd who accompanied me on these dates.

Next: A date at a garlic farm

**These are my views and not necessarily those of my friend.